5th Anniversary Edition of Ruminations at Twilight by L.M. Browning 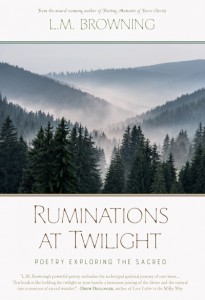 This month marks the 5th anniversary of the release of Ruminations at Twilight by L.M. Browning. One of the first titles in Homebound Publications’ library In celebration, we’ve released a new edition featuring a new note penned by the author in the beginning of the book.

An excerpt from the new foreword:

A Pilgrimage to Authenticity

I wrote Ruminations at Twilight at the age of 28 in an intense burst of creative clarity. The foundation poem “The Sacred” was written over the course of two nights, during those soft midnight hours that are so inviting to those of a contemplative bent. In the wider landscape of my career, “The Sacred” marked the first step of my formal literary path. It was the first time I had ever wrote something that I felt relevant to anyone other than myself; over the course of its creation, I transitioned from writer to author.

As time passes, my perspective evolves, the context of my memories shift, and I regard this little book with varying significances. At this waypoint in my life, I look back on Ruminations at Twilight as precisely what I intended it to be: poetry exploring the sacred, but, even more specifically, poetry exploring the reality of sacredness as it exists beyond religion. These pages embody a youth’s odyssey from the shadowlands of convention and unto the golden vista of independent thought.

Raised a catholic, I made passages through many of the Abrahamic religions throughout my restless search for answers; staying in each faith long enough to learn stories that lie at the heart of each religion’s worldview. Inevitably, feeling the need to depart and continue the search for a set of truths that agreed with my soul. During a particularly alienated period, I even considered myself an atheist simply because I couldn’t embrace the ideals of any one organized religion.

For years I agonized in an in-between, staying within faiths I couldn’t fully embrace as essentially a mystic—one who believes that knowledge of the divine is gleaned through firsthand communion and not disconnected worship. Until finally I came to terms with my uneasy feelings towards religion when I realized that just because I couldn’t believe in the Abrahamic portrayal of God didn’t mean I was rejecting the existence of some immortal ineffable being. I was simply rejecting religion’s conclusions regarding the nature of the divine. In short, I realized that, in order to understand the true nature of the divine, I had to leave behind all religion; I had to separate God—sacredness—from religion.

With this perspective, I was freed to explore the definition of sacredness through firsthand experience, without preconceived notions, expectations, or dogmatic boundaries. My departure from religion and subsequent emergence into the cosmology beyond, was akin to a child leaving behind school to begin their life as a mature adult; it was the process of departing theory and lessons to find the flesh and blood reality of sacredness.

Escaping the high-walled structures of religion, I ventured outside to touch the divine with my own two hands and hear its voice with my own two ears, finding in the wild a sacred simplicity I could understand.

Ultimately, the youth that penned the intimate pondering found between these two covers, matured into an ecology-minded poet and artist. Walking the path, I eventually made my way into the deep woods, through the snowy mountains, and along the crisp shorelines. I put away scripture and came to sit at the knee of those who found otherworldly worth, right here, in the earth we inhabit; thinkers such as Henry David Thoreau, John Muir, Barry Lopez, Ralph Waldo Emerson, Gary Synder, and Annie Dillard, to name but a few.

For fifteen years I looked for sacredness in human-made objects: religion, philosophy, churches…only to find revelation in the landscape. Coming to realize that, unlike religion, which is permeated with politics and lies, nature is honest and unpretentious, and in this, nature is trustworthy. The wild earth, while at times harsh and unsympathetic, isn’t scheming; it has no hidden agenda. It is what it is—naked—laid out for all to see and, unlike humankind, is ever-respectful of the balance of all things and the natural laws that go unspoken between all creatures.

Brought to awe by wild encounters, I found the hushed transcendence I seek among those creatures who carry a spark of the divine and live with grace in the still-wild world. As I progress as a writer and an individual, I cannot help but look back on this collection and remember it fondly as the first step into a wider world.

Signed editions of Ruminations at Twilight are now available in the Homebound Publications store. The ebook is available in Kindle, Nook, Kobo. The audiobook is on iTunes, Amazon, Audible