Afoot in Connecticut | The Bird in the Silence [Video] 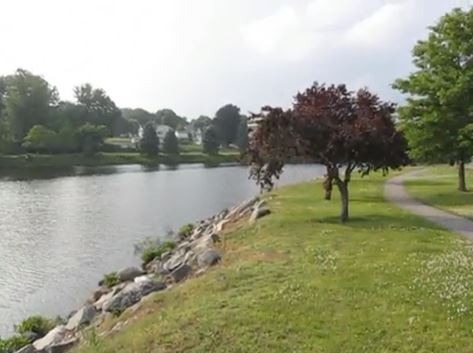 Afoot in Connecticut, is a love letter to this often overlooked region of America, an inspirational story that will have you taking to the trails and the greenways, along the beaches and mountaintops, and into a land full of transformation, of beauty, and of strength.

Many a time, when Eric travels through the Nutmeg state, he brings his camera, allowing us to go with him on his journeys. In this video Eric reflects on what he terms “the last green valley” in Connecticut. Below the video you can read an excerpt from Afoot in Connecticut.

One fine August day, having just returned from a seven-day hiking tour of England’s Lake District and being in fairly good cardiovascular shape, I decided it was time I hiked up Bear Mountain, part of the Taconic Plateau, at an elevation of approximately 1800 feet, over a thousand above the surrounding valleys. This is one of four identified plateaus in our state, all formed of a more resistant granite and schist bedrock. Below are the marble lowlands that have eroded away in the acids of northeastern rainwater. Bear Mountain itself is 2316 feet tall, the highest peak in Connecticut. The shoulder of Mount Frissel, whose summit is in Massachusetts, is technically the highest point, but that didn’t quite have the same romantic ring. So, I drove up Route 8 and west on 44 to Salisbury, where I found the Undermountain Trailhead and parked. Grasping my walking stick firmly, I shouldered my light pack and tramped up the hill. The rocky path became steep fairly quickly, but I was able to endure without stopping, keeping a slow but regular pace. I passed under the peak to the east, encountering no one, listening to the joyful August birds.

After a remarkably short interval, I reached the Massachusetts border and entered a grove of large hemlocks, where the spur ended at the white-blazed Appalachian Trail. After munching on an apple, I turned left and pushed steadily up the ledges and boulders to the remains of a crumbled monument on the peak. I climbed to the top and enjoyed the three-hundred-sixty degree view of the Riga Plateau and the Taconic Mountains: trees, trees, trees, as far as the eye could see, rolling ridges of rippling green. This was one of the prize views in Connecticut, quite frankly, mostly due to the fact that it is the only one involving significant mountains. I peered down at the Twin Lakes in Salisbury, where a year before I had unsuccessfully attempted to find and break into a lost, closed-up cave. North was our neighbor Massachusetts and I fancied I could see the gorge where I had once relaxed in the big trees of Bish-Bash Falls park. As I ate a small lunch, a family reached the summit from the other direction and then an entire class of Wesleyan University students. They were freshmen out for their introductory weekend. I had no idea Wesleyan used this unorthodox but brilliant method for initiating their students. I satisfied myself with unauthorized hikes in the company of my English students around the body of Sleeping Giant or out to Fayerweather Island in Bridgeport.

I chatted with the teacher and students for a while, and then tramped down the AT with views south and west into New York, where I glimpsed the storied peaks of the Catskills glimmering above the Hudson River Valley. Hitting the Undermountain Trail again, I trundled quickly down to my car. The book suggested four hours for this trip. I had taken two and a half, including at least forty-five minutes relaxing on the summit. I was sure I would never be in such great shape again. But I hoped that I would find another fine spectacle worthy of the effort.

Why are these views from high places so meaningful to the human psyche? People I know who have no love for the outdoors still treasure these rare, visionary moments. I have no real answer, only a story. Once I hiked up High Rock in Hamden after the loss of a friend, who was not much older than I was. He had wasted away with cancer, becoming a shell of himself, withdrawing into bitterness before dying. I felt old, like my life was also tipping into the void. As I walked up the path, a large black snake, at least five feet long, slithered across the trail and into deep, matted leaves. I found an unusually rounded boulder, like half an egg, and perched on top, reading Henry Miller’s famous travelogue of Greece, The Colossus of Maroussi. A strangely diurnal bobcat bounded up the cliff edge, out of the brush, and stopped, astonished at my presence, then loped off into the woods.

As I sat on that wild island of stone in midst of civilized Connecticut, gazing over the small metropolis of New Haven, I meditated on my mortality, on inevitable change, on the power that loss has to destroy our will. The grim ghost of death had stalked me for the past few months, ruining my seemingly steadfast appreciation for nature. My steps had been weak and unenthusiastic lately. But now I stared down at the world I enjoyed and death seemed far away. The memory of my friend rustled the green backdrop of leaves, blessing rather than cursing me. I smiled, suddenly in love with everything around me, with the trees and the city, with the birds and the silence. I walked down the hill and into the summer of my life. — Excerpt from Afoot in Connecticut, “Chapter Seven: The Bird in the Silence”

About the Book: Afoot in Connecticut, is a love letter to this often overlooked region of America, an inspirational story that will have you taking to the trails and the greenways, along the beaches and mountaintops, and into a land full of transformation, of beauty, and of strength.