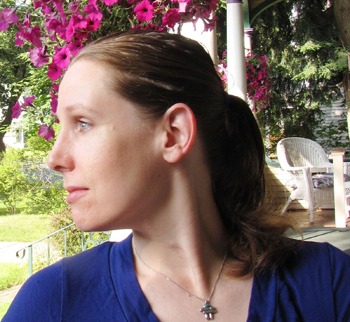 Amy Nawrocki reflects on her new collection, Four Blue Eggs, which was named finalist in the 2013 Homebound Publications Poetry Prize.

The poems in Four Blue Eggs reflect a wide span of time, poetically and literally. The earliest poem was “born” when I was an undergraduate; the most recent, a few months before I sorted through my files looking for poems that would fit together as a collection. Like me, the poems seem to be fascinated by time. Many poems mark milestones—birth, adolescence, schooling, growing older, dying. Some muse on time standing still, some trace the sun passing over the sky on a single day, some lament that it soon will run out. I find the passage of time—cosmic time, rock time—extraordinarily interesting. Humans are consumed by time in a different way, so I enjoy watching how trees and animals approach the world, seemingly unaffected except to acknowledge, now it is winter, now it is summer.

The philosophy of Homebound Publications aligns with what I try to do in my poems: contemplate, observe, and reflect. Tinker, tinker, tinker, write a little, tinker some more. Occasionally a poem comes about exactly as it happened, (like “These Hours”) but most of the time, poems ferment for a long time (like “Delta 88”). For me, that’s a good thing; like a sprout in a countertop window, a fair amount of time, sun, and moonshine is needed before a poem makes its way into the world. I let the poem tell me where it wants to go. Often, it’s nowhere near where I expected. “The Mail Drop” needed a story, so I gave it one. “The Nautical Why” needed Adrienne Rich, so I found her.

When I look at the collection as a whole, I see life taking shape, born out of a petri dish, if you will, like the girl in the opening poem. A lot of things happen along the way. There is some philosophizing (“The World of Ideas”, some learning (“Community College”), some confusion (“Mechanics”), some love “Caesura”), some sadness (“Threads”). Sometimes seasons change, sometimes disasters ensue, sometimes you make it up the mountain, sometimes you don’t. Creatures are born and loved ones die. But the poems bring them back and help let them go. Time passes. After it all, if you are able to “carry yourself out of a burning building” then that is a remarkable thing for me as the writer.

Four Blue Eggs will be released worldwide on February 7, 2014 in paperback, Kindle, Nook and Kobo editions. Pre-order your copy today in our bookstore and we will ship your order within 48 hours. Enjoy a free sample of the collection below.

Amy Nawrocki is a Connecticut native, raised in Newtown and now living in Hamden. She earned a Bachelor’s degree from Sarah Lawrence College and a Masters of Fine Arts from the University of Arkansas. She has received numerous honors for her poetry, including awards from the Litchfield Review Poetry Contest, the Codhill Chapbook Competition, The Loft Anthology, Phi Kappa Phi, New Millennium Writings, and the Connecticut Poetry Society. Finishing Line Press published her three chapbooks: Potato Eaters, Nomad’s End, and Lune de Miel. With her husband, Eric D. Lehman, she wrote A History of Connecticut Wine, A History of Connecticut Food and A Literary History of Connecticut. She teaches English and Creative Writing at the University of Bridgeport and is mother to two cats, Maple and Django.