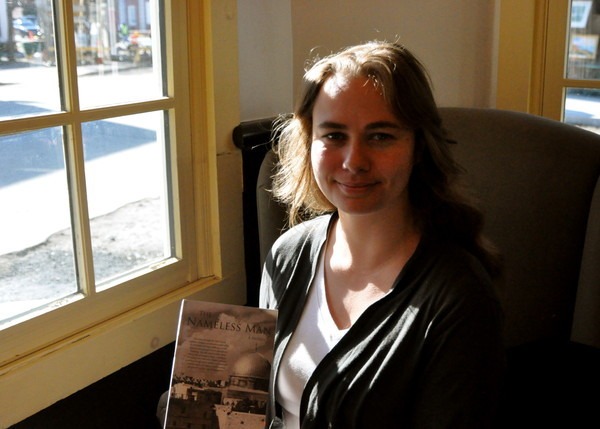 Recently L.M. Browning sat down with Bree Shirvell Editor of the Stonington-Mystic Patch to discuss her new novel. Continue on the the Patch to read the article there (there is also a video reading) or read a copy of the article below. Go to The Patch >>

“Sitting across from me in Bartleby’s Café sipping on her tea, L.M. (Leslie) Browning is at once striking, impressive and familiar. The 29-year-old lifelong Stonington resident is preparing to embark on a book tour for her first novel, The Nameless Man, co-authored with Marianne Browning.

Described as spiritual search, The Nameless Man follows 18 strangers as they explore the ideas of love, evil, religion and God. “Traveling through the Holy Land, eighteen strangers are forced to take refuge in Jerusalem during a militant attack. Kept in close quarters in an abandoned building, over the course of four days this group of strangers begin a dialogue, discussing love and evil, religion and god; finding amongst their number a mysterious nameless man who poses a revolutionary perspective on these age-old questions,” states the book blurb.

Recovering from a cold Browning sits in an overstuffed chair wrapped up in a gray cardigan, easily impressing me with both her literary success and humble nature. A published poet and now the author of a book, which has already been nominated for a 2012 Pushcart Prize, Browning did it all while working, until recently, two jobs and going to school. “It was just something I had to get out of me,” Browning said of her book, “It took eight years.” But it’s her youth and her weighty topics that strike a familiar chord, one many especially those in the younger generation will likely relate too. Brought up Catholic, she was 17-years-old when she started studying world religions immersing herself in Tibetan Buddhism.

“I couldn’t quite agree totally with any one religion,” Browning said. “I took what I thought appealed to me.”

As she reevaluated her own philosophy, faith and ideas, the book slowly came about. “Many people are transitioning from formal religion,” Browning said.

Those struggles with traditional religion versus spiritually are topics increasingly seen throughout American society—think an An Atheist Manifesto, and Christopher Hitchens’s god is not Great—but rarely have the articles, books and videos been created by someone part of the generation most likely to turn away from the traditional.

One in four Americans ages 18-29 say they are not currently affiliated with any religion, and Browning, a 2000 graduate of Stonington High School, sees that among her friends and her generation saying she thinks the spiritual search is happening a lot more in the young. Still Browning is quick to point out her novel isn’t about opposing religion and certainly isn’t any sort guidebook or something likely to be citied in an academic paper. Instead Browning’s book explores faiths and ideas, seeking answers to some of life’s most universal questions. All while taking the reader on a journey with a character whose parts the reader will see some of his or herself in.

“I hope the book opens people’s minds to look at things differently,” Browning said. “It’s really important to explore and redefine what you believe in instead of just giving up.”

Browning is in Massachusetts this week doing readings of her book, which debuted on Nov. 25, but she’ll back in the area shortly promoting her book at Westerly’s Other Tiger Book Store on Dec. 7. And while the published poet and now author has no plans for her next novel just yet one can’t be far off.

“It just happens—writing isn’t a profession, it’s a condition, you just are a writer,” Browning said.[/box]