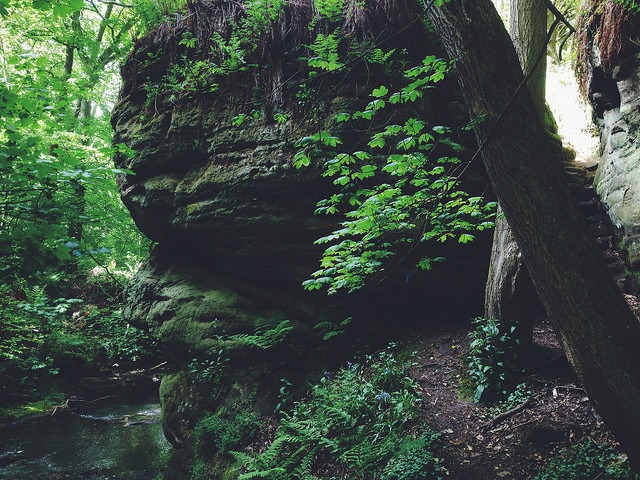 As the road curves up and out of the Scottish town of St. Andrews, leaving the harbor below to the left, a small, unobtrusive sign appears on the right, pointing down a narrow lane. Dunino is very easy to miss, and we only found it with the help of a local who knew the ancient sites.

Dunino means the Hill of the Seven Daughters.

The lane leads to a church, which probably dates to the 19th century, but is surely built upon much older foundations. St. Andrews has been an ecclesiastical center since the 9th century, and there are Pictish stones standing sentinel in the churchyard at Dunino. 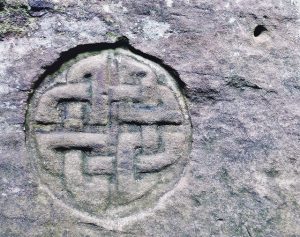 A set of steps hewn from stone leads into the woods near the church through pillars of trees to a sacred grove, and as we descended through the trees we were assailed with the smell of decay. The smell of something dead on that cool Scottish June morning, something in the long grass amongst the trees.

The steps lead to a natural grotto of high stone walls and a quiet stream, the Kinaldy Burn. This is Bel Craig, place of forgotten ancient ritual, where the mind leaps to fertility rites and human sacrifice.

This is also the Druid’s Den, place of modern supplication.

There is a human foot carved into the rock lining the ground, there is a small well, and there is the feeling of the hair standing up at the back of your neck, the chill of the unknown.  It’s not as if someone walked over your grave, it’s more as if an entire herd of sheep are marauding upon it.

This is chillingly sacred space. Some people have felt great peace here. I felt peace spun through with electricity. And the smell was dubious.

A closer view of the tall rock wall reveals a Christian cross carved 9 feet high into the façade, Celtic in style, the cruciform surrounded by a circle.   The circle denotes the sun, hinting at older ways of pre-Christian solar worship and inviting warmth to the chill grotto that never quite catches the light.

Christianity has stamped its mark on the pagan site, adding another layer of the sacred.

The grotto is festooned with offerings. We saw ribbons, and bits of cloth, pieces of paper and small bunches of fresh flowers, and there were piles of coins among the bits and pieces. Make him love me, send me a child, keep them safe, ancient incantations and hopes and prayers. And all of these offerings were fresh, recently made by modern people, by our contemporaries, invoking the Lady’s favor, appealing for help in whichever guise she chose to take.

You must ask carefully at Bel Craig, because legend has it you will always receive your wish.

And still we smelled that stench, that smell of decay among the rocks and the talismans, and we never did find its source.

Mary Petiet (www.marypetiet.com) writes about current events, organic farming, local food, history and spirituality. She is a long time contributor to Edible Cape Cod Magazine and a reporter for the Enterprise Newspapers. She has been featured by Parent Co and has articles pending in STIR Journal and the Manifest-Station. Her book Minerva’s Owls, which reinterprets old stories in new ways to create a new future, is scheduled for release by Homebound Publications in April, 2017. Follow her on twitter@maryblairpetiet, google+, and facebook.