The Foundation of Summer by Eric D. Lehman | A First Look

A first look at our upcoming offering The Foundation of Summer: New England Stories by Eric D. Lehman. Look for it June 8, 2015 on Amazon, B&N or ask for it in your local indie bookstore. 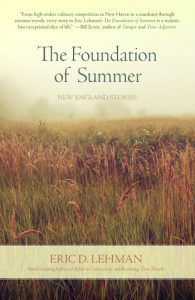 About the Book: A scholar forges a masterpiece, a drug dealer solves a mystery, two trackers chase each other through the space between the suburbs. Join the fanatics, impostors, murderers and fools who inhabit Eric D. Lehman’s The Foundation of Summer, as they search New England for a season of transcendence.

From high-stakes culinary competition in New Haven to a manhunt through autumn woods, every story in Eric Lehman’s The Foundation of Summer is a realistic but exceptional slice of life.

“The Foundation of Summer: New England Stories opens like a fine wine: take a sip of a slow, hot, New England summer with its spicy overtones of self and place….” | Read Full Review»

“Whether his characters are collecting fiddleheads in Maine, swapping drinks in a Montreal bar, eating adventurously in New Haven, or speed-boating through stylish Westport, Eric D. Lehman turns words into palpable topography and architecture. In these well crafted stories, people ‘at the mercy of forces we could never hope to challenge’ keep an abiding faith that ‘no trail followed to its end is useless.’ Vividly realized individuals confront dilemmas of personality and circumstance, finding themselves redeemed by experience despite unexpected and uninvited outcomes. Reading these stories leaves you feeling as if you’ve been to these places and met these people.”

Pre-order in the Homebound Publications Bookstore