Four Blue Eggs by Amy Nawrocki is now available! This past summer, Amy’s collection was named the finalist in the 2013 Homebound Publications Poetry Prize. We are pleased to see the book come to fruition just in time for the early days of spring!

About the Book: Four Blue Eggs is sense music, an exploration of beginnings and of endings. In this collection of poems, Amy Nawrocki intuits fireflies and sapphires, observes gardens rooted in glasses of water, and tests the bindings of old books. Solace abounds—in winter’s white, in the hefty doors of an Oldsmobile, in half melted candles. Stick figures walk in this terrestrial moonscape, birds nest in improbable trees, daughters survive without mothers and fathers. Her poems propose that though “we earn the favor of being by breaking,” the pieces are salvageable; bruises heal from the inside through the universe’s infinite surrogacy. The collection contemplates how to tether the salty wounds of sadness, how to find our treeness, and how to say good bye.

“Like Whitman, Amy Nawrocki gracefully extols the beauty of nature while subtly lamenting our detachment from it. Her elegant writing lends transcendence to our everyday world…”

“As if she were a weaver at her loom creating a tapestry of Four Blue Eggs, Amy Nawrocki threads the death of her mother into poems that navigate the tension inherent between the heart and mind created by ‘the mind’s insufficient wiring.’ Written with a lyrical but unsentimental voice, Nawrocki crisscrosses generations by describing tactile memories like peeling parsnips during January while ‘iglooed’ from the cold. Each poem is underpinned with the tenderness Nawrocki displays in a powerful poem, ‘Threads,’ where she keeps the cat from waking her mother while she is choosing a dress for her cremation.

“…In her struggle to navigate the world and cherish its beauty, in a particularly vivid poem about bees, she observes ‘What lasts is not the sting….what lasts is the internal honey.’ Ultimately, teaching us to ‘flame into the now,’ Four Blue Eggs ignites a candle that the heart and mind can follow.”

—Vivian Shipley, author of All of Your Messages Have Been Erased and Connecticut State University Distinguished Professor

“Amy Nawrocki’s poems celebrate preservation and renewal in New England landscapes. Births, deaths, and the whimsical appearance of the mysterious—all are welcomed as the poet invites us to ‘light the light that will unblind us.’ Nawrocki is a deft observer of the beauty of work, be it pickling or pulling a quahog from the muck. The weathered and the wasting, too, are treated with wonder by this poet who describes a bygone farm in which pumpkins in a field are ‘sitting like children watching a magic show.’” 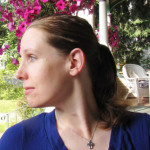 About the Author: Amy Nawrocki is a Connecticut native, raised in Newtown and now living in Hamden. She earned a Bachelor’s degree from Sarah Lawrence College and a Masters of Fine Arts from the University of Arkansas. She has received numerous honors for her poetry, including awards from the Litchfield Review Poetry Contest, the Codhill Chapbook Competition, The Loft Anthology, Phi Kappa Phi, New Millennium Writings, and the Connecticut Poetry Society. Finishing Line Press published her three chapbooks: Potato Eaters, Nomad’s End, and Lune de Miel. With her husband, Eric D. Lehman, she wrote A History of Connecticut Wine, A History of Connecticut Food and A Literary History of Connecticut. She teaches English and Creative Writing at the University of Bridgeport and is mother to two cats, Maple and Django.

Buy on Amazon.com» | Buy on Barnes&Noble.com»