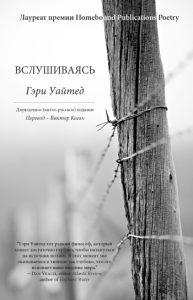 Celebrating the first translation for our ever-expanding press, we are pleased to announce that we are now offering a Russian and English edition of Having Listened by Gary Whited. In this new bilingual edition, you can see each poem in this award-winning collection with side-by-side English and Russian translations.

Having Listened evokes a sense of the place of the prairie through both a personal and a philosophical reflection on that place. In 2013 it won the Homebound Publications Poetry Prize and then in 2014 the collection won the 2014 Silver Medal Winner of the Benjamin Franklin Book Awards.

This bilingual edition is available exclusively through our bookstore! Visit our Store»

“The book is called Having Listened, after one of these elegantly simple, tender, attentive poems. It might as well also be called Having Looked, or maybe Having Heard, Having Seen, the task achieved. The animals and birds and other creatures, the human beings too, in their beauty and their managing of their lives, what they accomplish in patterns of flight or birdcall, in drinking water from a water tank, in the rusting of a fence are given, poem after poem, in beautiful quiet rhythms and syntactical managements, such careful and respectful attention, it can bring tears to your eyes.”

“What does it mean to listen to stillness, to the wind passing overhead, to horse hooves galloping in a pasture, or even to a barn door that blows slightly open, its hinges creaking? In these carefully crafted and exquisitely meditative poems, what is listened to are the sounds of the prairie ranch of the poet’s childhood, but underneath their Montana landscapes, these poems offer us an ongoing inquiry into the nature of listening, what it asks of us, and what it gives in return. Gary Whited teaches us that deep listening is in effect a prayer, a gathering and focusing of our attention, that sometimes lets us hear the mystery of being whisper back.”

“In Having Listened, Gary Whited guides the reader to a time and place that evokes the very essence of his experience growing up on the prairie of Eastern Montana. Through his eloquence and imagery, Whited brings the reader to a deeper understanding of the spiritual beauty and sorrows of that life and thus a deep universal connection to it.”

“Gary Whited is that rare philosopher who digs deep enough to strike the wellsprings of poetry. Here we enter a stillness so profound it changes the way we see the world.”

“Gary Whited has written a collection of poems about rural, western landscapes. His poetry brings readers along fence posts where western characters prevail: rattlesnakes, magpies, hawks and horses. His characters are startled by the earth as the poet is, and brings us there to the simplicity of earthly matters. Whited’s poetry reminds me to observe the slow movement of time.”

“Gary Whited’s poems are a moving evocation of a truly iconic American landscape and culture, and a past we all share, that mysterious and sometimes frightening passage we call childhood. It has been a great privilege to witness the evolution of this work which has a deceptive simplicity but whose emotional depths inspire repeated reading.”

“What gives this love-song to the prairies of Eastern Montana its heft and depth is not only the poet’s deep affection for ‘rattlesnake skins fluttering in the wind’ and ‘the perfection of still water’ just below the muzzle of his father’s white horse, but the way this love occurs amidst the disturbing sorrows and unspoken loneliness of these families in their struggles with themselves as well as the land. Having Listened, indeed, to the all of it, every wrinkle and sparrow, as well as his own darker side steeping like black tea in the cup of the self. And then the ancient voice out of the deep past, Parmenides, steadying him as he makes his way in the ubiquitous wind, like the ‘badger, who digs alone into the sod and the silence.’”

“Each one of Gary Whited’s poems is as fixed in place and time as a fence post on a snow-swept prairie in Montana, ‘holding the barbed wire under / the wounding staples’; each poem a listening post that’s staked at the crossroads of language and silence. These are serious and beautiful meditations on nature and family and hard work, detached yet possessed, as vigilant to elemental existence as they are entranced by it. Everywhere the writing is fully alive to the world it has so feelingly made.”

“For those of us who have known for many years the pleasures of Gary Whited’s quiet, prairie-steeped poems, it is cause for celebration to finally see his work collected and in print. We have waited a long time for this haunting, elegiac book.”

—Aimée Sands, author of The Green-go Turn of Telling

“A gentle deferral lies at the center of Gary Whited’s Having Listened. It’s not about what he thinks or declares, but about the fruits of patient listening. Fathers and fence posts, horses, prairie and creek beds, speak in subtle flow, silence, poise or uneasiness. Deference to the sharp or subtle splendor of the place frame the poems collected here—verse occasionally broken by a wise remark from Parmenides or an occasional prose reverie. The surprise and afterglow is memorable. I’ve returned often to the tunings offered here: astonishing, wonderful, drifting by like prairie wind.

—Ed Mooney is author of Lost Intimacy in Western Thought, and Postcards Dropped in Flight

About the Author: Gary Whited is a poet, philosopher and psychotherapist. He grew up on the plains of eastern Montana, and a strong sense of place pervades his poems, whether that place is the prairie, the city or the inner spaces we inhabit. His poems have appeared in several journals, including Salamander, Plainsongs, The Aurorean, Atlanta Review, and Comstock Rewiew. He is currently working on a new translation of the complete fragments of the 5th century BCE thinker, Parmenides. 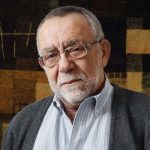 About the Translator: Viktor Kagan—M.D., Ph.D., psychiatrist and psychologist, well known Russian psychotherapist and psychotherapy trainer, author of numerous publications including just about 30 books. Main fields—autism in children, child psychosexology, psyhotherapy. He moved to the USA in 1999 and worked as a Licensed Psychologist. He is the author of 4 poetry books (1993, 2006, 2009, 2012); poems have appeared in many Russian and International magazines. A licenciate of 3rd (2005) and 6th (2008) International Literary Voloshin Competition and the awardee of Silver Age award (2009).