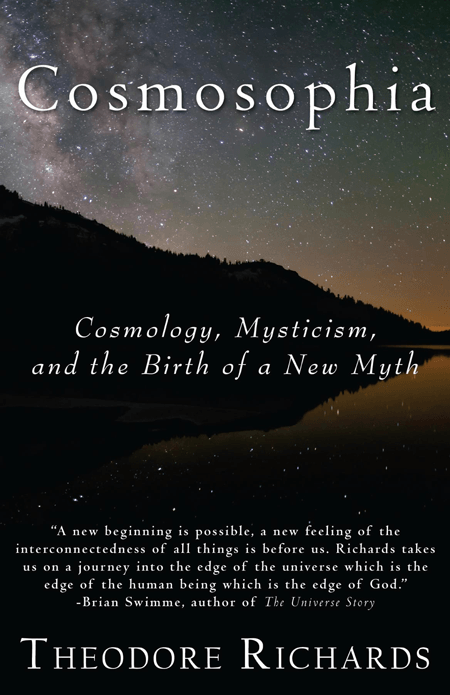 Cosmosophia: Cosmology, Mysticism and the Birth of A New Myth by Theodore Richards will be the first title released by Hiraeth Press in 2011, beginning what will be a landmark year for our burgeoning Press. Recently Richards was interviewed by L.M. Browning concerning his forthcoming work.

Browning: Cosmosophia is more than a book, it is a spiritual philosophy. If you had to briefly introduce what Cosmosophia is, how would you do so?

Richards: I think of Cosmosophia as a an approach to life, a set of values and metaphors that can give a person a sense of place in the Universe—and at the same time, some tools to break through to a new understanding of one’s place in the Universe. Cosmosophia is how I have understood my connection to and place in the cosmos, but there are obviously many other ways to approach this. This is where cosmosophy comes in—it describes a discipline that can help anyone come to this understanding for her self. But the important thing to remember is that we don’t really do this work alone. I think of it as a tapestry. No individual can create a cosmology because a cosmology is first and foremost a reflection of relationships.

Browning: What was the conceptual realization that eventually birthed Cosmosophia?

Richards: At its core, Cosmosophia has to do with certain core metaphors that define our values and the way we relate to one another and the world. The primary conceptual realization had to do with a shift from mechanistic metaphors–the Universe is a machine–to organic ones. I expressed this primarily through the metaphor of the womb. The womb, I think, is an important metaphor because it relates to an experience every person shares. In addition, it describes both an experience of being nurtured–the Earth, our mother, nurtures us–as well as a process of birthing. The Universe is a process that involves a subtle tension between giving birth to novelty and being contained by the wisdom of the cosmos. There is a right moment–what the Greeks called the kairos–to give birth to a new way of perceiving the world. So, although this is a series of metaphors, a narrative, which work for me, it’s also important that that it rings true. The mechanistic metaphor, after all, is true to some degree, and has worked very well for some individuals. But the time is right for a change.

Browning: The Divine Comedy by Dante Alighieri is referenced several times throughout Cosmosophia. How did your personal connection to Dante’s works come about? In what way did his ideas influence the growth of your philosophy?

Richards: I got into Dante from several conversations I’d had with people who’d read him. For me, Dante was a combination of several things that made him the perfect person for me to study: he was a poet, a mythmaker, a mystic who was at once the ideal representative of the cosmology of the Late Middle Ages and rebel against the elites of his day. My personal attraction to him came about from my own love of the Italian language and my love of poetry—particularly embedded, nature poetry. I started to study Italian more deeply and to memorize passages. Dante taught me, above all else, that to experience and express a cosmology fully requires not only an understanding of philosophy and science—which he had—but also and more importantly the sensibility of a poet.

Browning: Cosmosophia was written as your wife was carrying your first daughter; her growth seemed to coincide with the growth of the Cosmosophia philosophy. What other pivotal experiences in your personal life have shaped this work?

Richards: This image of my daughter pressing out at her womb, her world, was central to the work. I realized that this is what we are all doing, all the time. this is what it means to be a human. And it repeats itself. Just as we are born into this world, we will be birthed into a new world—that is, a new way of perceiving our place in the world. It’s impossible for me to overstate how much my daughter has meant to me in the process. She teaches me something new every day. Children tend to do this. There have been several children in my life who have been great teachers. They haven’t settled in to taking certain things for granted. My martial arts teacher, Tony, who taught me bagua, provided me with some substance, an embodied way of understand—not just understanding, but feeling—an alternative worldview, was also influential. And of course, my travels.

Browning: You have traveled extensively, 25 countries throughout the world, what significance did these pilgrimages play in defining your worldview?

Richards: Traveling—and I mean really traveling, not just staying in some resort—can profoundly influence a person’s worldview. For me, this really began before I’d ever left the country.  As a child, I got to know a lot of kids from different places and backgrounds.  Later, when I traveled extensively as an adult, I had many soul-shattering experiences. I have traveled a lot by my self, and to places that are not particularly touristy.  The story I tell in the preface to Cosmosophia about an experience in the tribal areas of western Pakistan is a good example.  Probably the time I spent in Africa—I lived and worked in Zimbabwe for a brief period in the 90s—was the most influential on me.  I lived in a rural area, perhaps 50 miles from the nearest phone.  I got to know the rhythm of the seasons; I watched the starry sky every night.  I worked for an NGO, teaching literacy to women.  The idea that I could teach anything to them was so absurd, but I learned a lot.  It was there that I really began to write—in fact, I wrote the first chapter of a novel in a bathroom on a beach in Mozambique where I was taking shelter from the storm.  So there are some specifics—I learned from the women I taught and from the culture in which I found myself.  I learned to experience nature in a more profound way.  But I think what travel does for us is show us that the assumptions we’ve held for so long are not quite so obvious.  We are challenged to ask our selves “Who am I?” without a lot to fall back on.  Cormac McCarthy’s The Road is the extreme example of this.  He explores what can happen when everything that has defined us—in this case, even nature—is gone.  What’s left?  Who are we?

Browning: What changes do you hope to see come from the introduction of this new perspective into the spiritual communities of the world?

Richards: I’d suggest that there are four major changes I’d like to see in our spiritual communities.  I guess I would also like to add that this isn’t just about my personal preference.  There’s a lot at stake. On its good days, religion provides us with the narratives that tell us who we are, from which our values come.  The first one is a deeper connection to natural rhythms.  This is related, for me, to the next, which is mysticism.  As I point out in the book, there are a lot of mysticisms.  But what I’m talking about is the mysticism that allows us to connect more deeply to the Earth.  The next is Interfaith.  The spiritual communities of today can and should be rooted in a particular tradition, but they also have wisdom to draw on from various traditions. This is particularly true in the United States. Finally, I would suggest that spiritual communities focus more on art, creativity, and the imagination.  Like nature and mysticism, this is hardly a new concept, but many of our spiritual communities have become places that lack imagination.  Fundamentalism is nothing if not religion minus imagination.

Browning: How does your work with the Chicago Wisdom Project relate to the ideas expressed in Cosmosophia?  How are you endeavoring to build community based on these principles?

Richards: I think it’s important to have both ideas and practice.  We have a lot of well-meaning people doing work in various communities who don’t really know why they’re doing what they’re doing.  Look at our schools: teachers are not trained to think deeply about what it really means to be an educated person, and this is reflected in our education policies.  At the same time, their are a lot of interesting books with good ideas that are never put into practice.  The Chicago Wisdom Project is about empowering our youth to engage in the kind of radical work that I suggest we need in Cosmosophia.  They are challenging the dominant narratives of the culture and working to create new ones.  They are encouraged to experience their world in a different way–by connecting to nature, by meditating, by growing and preparing their food, by having an authentic rite of passage.  We’ve done this in various locations in Chicago and we are working to build partnerships across the country (we already have a couple).  The next big step for us in Chicago is find a home.  We want to create an ecology in which art and spirituality and philosophy can come together to create a new culture–one that is more just, sustainable and compassionate.  We have joined a group called S.H.o.P. (Southside Hub of Production) and we are in negotiations to get a building.  We’d have a lot of resources for our kids—a woodshop, a music studio and radio station, various art classes.  But more importantly, we’d have a space in which to build community.  Education is something very important to me, and, I think, fundamental in terms of how to create and transform culture.  What we are thinking of is something like a radical alternative to the corporate model of school that one finds today.

Cosmosophia: Cosmology, Mysticism and the Birth of a New Myth will be release this week on February 25th. It will be available on Amazon and other online bookstores, as well as here at Hiraeth Press.com. For more information on Theodore Richards visit Cosmosophia.org