Jim Powers Authors ‘Saving the Farm’ | As Featured in The Day 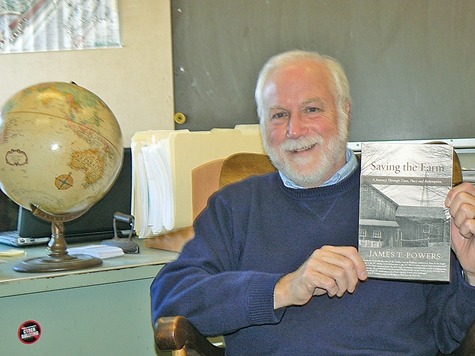 The first time Jim Powers eyed the historic Dudley Farm was in 1983, on his way to interview for a teaching job at Guilford High School (GHS).

“I drove by the farm, and David Dudley was there,” says Jim. “For the next eight years, I saw him on my way to work. I played a game where I’d wave at him, and if he ever waved back one day, I’d stop and talk. And one day in 1991, he finally waved back-but I couldn’t stop! I swore I would go back another time and then he passed away.”

Jim’s now authored a book on the creation of North Guilford’s Dudley Farm Museum, Saving the Farm: A Journey through Time, Place and Redemption, (Homebound Publications, 2013). Although they never met in person, in writing the book, Jim learned a great deal about David Dudley’s family. In Saving the Farm, Jim also chronicles an imaginative view into hurdles faced by generations of Dudley family members.

Jim describes himself as “just one of many people” involved in the evolution of the Dudley Farm Museum, now a North Guilford community cornerstone.

Continue reading for free at The Day >>