Last Walk on Silver Lane | An Excerpt from The Foundation of Summer by Eric D. Lehman 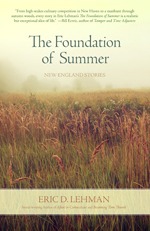 On June 8, 2015 we will release The Foundation of Summer by Eric D. Lehman, author of Afoot in Connecticut.

A scholar forges a masterpiece, a drug dealer solves a mystery, two trackers chase each other through the space between the suburbs. Join the fanatics, impostors, murderers and fools who inhabit Eric D. Lehman’s The Foundation of Summer, as they search New England for a season of transcendence.

Look for The Foundation of Summer in paperback and ebook on Amazon, B&N, the Homebound Publications bookstore or ask for it in your local indie bookstore! | Visit our Bookstore>>

Read the first short story from the collection below:

Lisle Midway had walked on Silver Lane all her life. She loved the long swing porches of the Victorian houses, the way the town’s macadam slowly faded into gravel, and the otter-shaped mailbox at the Tompkins house. Swallows nested in the abandoned barn at the end of the street, and flitted out each summer evening to keep the neighborhood free of mosquitoes. Beyond the barn, the gravel road became dirt, leading through the Old MacBurnie Farm’s abandoned blueberry fields, which had exploded in a beautiful riot of protest.

Lisle walked the mile of Silver Lane often, sometimes stopping at the colorful houses of friends along the way. Her own house on the corner junction with Main Street doubled as a breakfast nook, open from seven to eleven each morning. She had steady customers, all from the surrounding towns. They poked their heads into Lisle’s parlor weekday mornings as if intruding, and then took a seat in what had once been a large receiving room in the Victorian home. The eclectic collection of antique tables and chairs that Lisle inherited from her parents when they died drew individual customers to find their favorites.

In the summer she stayed open longer, saving her walk down Silver Lane until the cooler evening hours, when her neighbors were home from work and sitting on their long porches. She had no mortgage to pay, no children to support, and made just enough money with her breakfast room to buy the things she wouldn’t make from the general store and the other businesses in town. Once in a while she treated herself with a bus ride into nearby Hartford for a film or play.

But at the bimonthly town meeting, in the autumn of her fortieth year, Lisle received unpleasant news in the form of a new village map, drawn by some big civil engineering firm, showing clearly a long connector road exiting off the highway, curving through the Old MacBurnie Farm, and leading directly onto Silver Lane.

“What is the meaning of this?” Lisle stood up before minutes were even called.

“Let’s do things in order here, Ms. Midway,” Mayor Bunny West spoke up, popping the trademark folksy bubble gum that had gotten her elected the previous year. “We’ll answer all questions after the presentation.”

The presentation was a twenty-minute argument in favor of the new highway exit, the business it would bring to town, and the ease with which the residents of the township could now access the wider world. Many of the town’s residents looked to be in favor, and gave encouragement in the form of smiles and nods. Lisle ground her teeth. “But what about those of us that live on Silver Lane? We’ll lose our road.”

“Our property values will go down,” the Tompkins family chimed in.

“Some will suffer so that the rest can live.” Mayor West chewed her gum. “That’s usually the way of it, Ms. Midway.”

“Indeed it is,” agreed the angry Lisle. “Indeed it is.” She stomped out of the meeting, prompting some head-shaking and a few lonely looks of admiration. The proposed connector road passed with a resounding “yea,” though Lisle found that the Hartford newspaper that announced the new exit dated the transaction some weeks before the assembly.

A few weeks later, the “Sold” sign on the empty corner across from her, part of the large Pearson lot, prompted Lisle to pay a visit to Mrs. Pearson. As they sipped tea in front of the large winter fire, Lisle put forth the question.

“Why, that piece of land wasn’t doing anyone any good, so I sold it to an interested party.” Mrs. Pearson pinched her tea bag and looked slightly smug.

“A new family house to be built there, then?”

“No, one of them big-city businesses,”

“How’s that? Your lot is residential.”

“It’s on the junction with Main Street, same as you, Lisle.”

Lisle considered this, tapping a small silver spoon on the edge of her teacup. “Who is it, then?”

Mrs. Pearson shook her head. “After Bill died, what choice do I have? Now I can put Sandy through college.”

Lisle grudgingly accepted this logic. Nancy Pearson had to live, same as anyone. But Donutlicious? “Guess I’ll be looking for new work, with the big city Donut people moving in then,” she told Nancy.

“Oh, Lisle!” Nancy exclaimed, as if the idea had just occurred to her. “I didn’t think…”

New curbs and grates arrived next, lauded by all the neighbors as a step in the right direction, but then Lisle gained support when a backhoe ripped apart the grass edge of the lawns on the opposite side. When they protested, Mayor West showed them the documents that proclaimed that narrow strip “public land” and therefore ripe territory for a new sidewalk.

“Ah, but someone else does.” Mayor West popped her gum. “And you of all people should appreciate that.”

The rest of the neighbors stared at Nancy as she blushed deeply, realizing that her sale to a commercial property had led to this eventuality. Everyone turned away from her as she shuffled out, muttering about “rights,” and what harmony had still existed on the Lane dissolved entirely.

That summer the Donutlicious went up, with the cheap, almost temporary construction that always signals a moneymaking operation rather than a solid business. Lisle watched it, and listened to her customers discuss the new building with a mixture of aversion and interest.

“Might be a bit quicker on those mornings I’m late,” one said.

Another ribbed Lisle good-naturedly, “Well, Ms. Midway, what do you think of this competition over here?”

Lisle shrugged, and the customers laughed, secure in their lives, unaware perhaps of the changes that Donutlicious would bring, or that it might actually mean the loss of the beloved Midway place, which had filled their mornings with pleasant conversation and delicious pancakes.

When the trucks destroyed the blossoming blueberry fields to provide space to set up the concrete slabs and pre-fabricated walls for the highway connector, Lisle couldn’t take it anymore. She painted and finished a large sign that very night, and the next day her customers were treated to a large purple sign, affixed to two white posts in the front lawn, reading “Midway Café.” All commented favorably on this addition, though a few griped that it would bring more people to the café.

“Want your pancake and to eat it, too?” Lisle laughed pleasantly, though inside she fumed. Didn’t they understand what was at stake? Donutlicious would do more than just draw crowds, it would suck their money straight out of the village economy, leading to more intrusions, more changes, and the death of their current way of life.

The next step was to expand her hours to compete with her new rival. “Hire local,” she told herself firmly, and persuaded a neighbor girl named Celine to work at Midway Café rather than Donutlicious, seducing her with more flexible hours and a slightly higher salary. Now Celine could wait tables while she cooked, and they would stay open through lunch. Lisle would offer her best customers a sumptuous dinner, as well, but was loath to give up afternoon walks on the Lane.

When Donutlicious held its “Grand Opening,” Lisle took the opportunity to distribute leaflets on the statewide hiring practices of the big company, and persuaded a nearby local paper to run a story on the rivalry. In her interview she stated “Well, if folks want everything to be cheap and mass-produced, not to mention full of fat and chemicals, then who am I to stop them?” Of course, that wasn’t at all what folks wanted, and Lisle knew that. The Donutlicious did less than stellar business in the first month, losing out to the Midway Café’s “genuine omelets” and “home-cooked meals” which luckily still had value in that little part of the world.

Of course, this branch of the Donutlicious was owned by a man from Hartford, and not the village, and as Lisle found out, was a speculative franchise, rather than something the company itself had invested in. Seemed that the Hartford man thought he would take advantage of being the first fast food off the new highway. But he had not counted on Lisle’s resistance or persistence in whittling away at his profits. She spent all the profits from her own expanded Café on promotion, and having very little overhead compared to Donutlicious, began to steal customers. A purple “Midway Café” appeared on the blue “Food: Next Right” signs on the highway, looking quite attractive next to the common Donutlicious swirl. One by one, the Hartford papers took up the story of Lisle’s struggle, knowing that their readers loved stories of small businesses fighting large corporations, even while they consciously or unconsciously supported the latter.

A “For Sale” sign appeared at the Pearson house, as Nancy and her daughter Sandy decided to remove themselves from a neighborhood that now loathed them, using whatever profits they had to put a downpayment on a new house instead of Sandy’s education. Other neighbors grumbled at town meetings, and in the parlor of the Midway Café, about the traffic on Silver Lane and the trash and litter created by the customers of the Donutlicious. But signs of progress appeared. Fewer and fewer cars turned into the lot across the street. The “Now Hiring” sign never went down, though Lisle could see fewer employees working the night shift and other slow times. Finally, the lights failed to come on one morning, and a sign hung in the Donutlicious window: “Moved to Exit 75.”

After the lunch rush, Lisle hung the “Closed” sign on Midway Café and walked out onto the long swing porch. Her last customer, Mrs. Tompkins, was still there, watching traffic go past on Main Street. “Looks like you’ve won, Ms. Midway,” she said. Lisle smiled, but as she strode out to take a step onto her beloved road, she stopped, looking to where it curved over the Old MacBurnie place to the expressway. The unyielding concrete curbs, the “For Sale” signs at many of the homes of former friends, and the cars zipping down the long, slick macadam, all reminded her that she had lost the gravel enchantment of Silver Lane.