Letters from the Other Side of Silence | An Excerpt

An Excerpt from Letters from the Other Side of Silence

The volcano in question was Pacaya, that black monster of the western highlands known for its dramatic displays of lava, which surge against prediction and against a landscape so austere it rivals the moon. We found Pacaya in Steve’s guidebook one Easter weekend. Something about punishing switchbacks and menacing rivers of lava over which folks could roast marshmallows (and they did), and we were in. It all seemed so sensible from the sturdy haven of our friend’s summer cottage, Merlot in hand.

Somewhere around 8,000 feet, that all changed. The lush trees that lined our path gave way to shards of basalt, then rock, then long slopes of rubble that climbed into the sky. What few trees remained were arthritic and bent, their charred branches calligraphic against the bright Mayan sky. Soon there was no path, only a windswept ascent that stratified everyone by ability. We would turn a corner, and strange new vistas would appear: jagged fissures in the earth two yards long, coils of braided rock, and waves, waves of lava having long been cooled, blackened, their motion frozen in time. “Pahoehoes,” they call them, these cases of rock becoming liquid becoming solid again. Stray dogs in need of warmth sought the company of the fissures, natural manhole covers that vented sulphur and steam from beneath the earth’s crust.

After our final turn, I felt the heat of the lava a few seconds before I saw it. After an hour’s hike, it was more than a little disappointing—a small vein of red oozing from a titanic wall of black rock (punishing switchbacks, yes, but a river of hellfire this was not)—until I witnessed the wall itself swell and glow, breathing in ways my Midwestern eyes couldn’t reckon. At first, I thought it was just the heat shimmering off the wall, the way a paved road can make the summer horizon dance, but then it cracked. Cracked, I tell you, after centuries, maybe millennia of indifference to the world. The wall cracked and began to crumble, spewing impermanence everywhere as it dismantled itself boulder by fiery boulder until nothing remained but a sea of orange suede.

It was too much for me, all that cracking and dismantling. Nearby noises, Steve’s banter with the Canadians, the guide’s “vamos! vamos!”: It all retreated into the distance. And then, with no warning, it happened: My syntax simply departed, leaving my words to float in the atmosphere like dust. My rationality, drifting out there among the birds. Soon enough, the words themselves scattered and dissolved, leaving me to experience the world without categories, without reference. Ever tried to take a math test while falling into a lake while sleeping? Well, it was just like that.

I know what you’re thinking. No, I wasn’t high up there on Pacaya. I wasn’t low. I wasn’t looking for an experience to transform my life into something special. Stripped of language, I simply slipped beneath it all—and by it all, I suppose I mean my mind—to a place where even fundamental distinctions were no longer clear, like the difference between you and me, right from left, now and not-now. And though mighty and positive, it was also a place of purgation, an evisceration of the psyche, you might say. Truth be told, I want to use the word cosmic here because cosmic it was: an encounter with a God mysterious, though not the God of Michelangelo’s making, not ol’ Greybeard from my youth. No, it was an imageless God up there on that mountain, a cosmic Whole, an intimate presence that made all things One.

I don’t remember the hike down or much of the flight home, but when I got there, I threw out 30 books I knew I’d never read. I’ve since thrown out 30 more. I took art off my walls. I cut my hair. I trimmed my fingernails and cleaned my car. I canceled Netflix. I no longer enjoy martinis. Let me say that again: I no longer enjoy martinis. I focus more on people and less on my perception of their perception of me. I used to think the circle was the perfect form. Now I only like circles when I imagine them collapsing on themselves, realizing their ultimate point form. If a circle’s just going to hang around being a circle, it’s wasting space I figure. The world doesn’t need another lazy abstraction.

Where, I ask you, where will this profound sense of economy lead? All I can come up with is “my vanishing, my vanishing.” That’s what I’d say if I were a betting man. 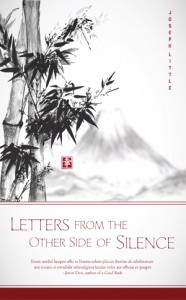 Letters from the Other Side of Silence

In Letters from the Other Side of Silence, Joseph Little chronicles his search for a meaningful life after slipping into a mystical state atop Pacaya, an active volcano in Guatemala. The journey takes him to a reclusive Russian mystic meditating in the Himalayas, an American theologian in St. Louis who helps him turn the quest inward, and eventually to an Agent Orange orphanage in Vietnam, where Little begins to realize the wholeness of a life that balances the inner fire of wordless prayer with the satisfaction of serving others.

Joseph Little is an associate professor of English at Niagara University, where he directs the first-year writing program and teaches courses in science writing, travel writing, and writing and well-being. He lives in Western New York with his wife, Samantha, and their 11-year-old puppy, Sister.

*All author profits from the sale of this book will be donated to the Friendship Village, a home, school, and clinic in Hanoi, Vietnam, for approximately 120 children and young adults living with disability owing to exposure to Agent Orange.