The Dream – An Excerpt from The Crucifixion by Theodore Richards 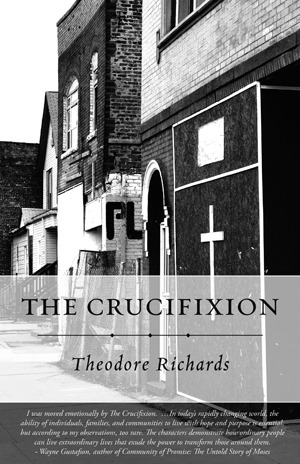 The Dream – An Excerpt from The Crucifixion by Theodore Richards

The Crucifixion is now available on Amazon, B&N and right here in our bookstore. Click here to add it to your library >>

…it happened the same, over and over again.

In the beginning, he always looks down at his feet, moving to the steady rhythm which he recognizes as his own, slow pace. But he is less looking down than he is avoiding looking up.  His eyes reveal so much: the blank, horrific gaze of a man who has crossed the threshold from seeing the world as God made it, as a child sees it, only in its beauty, to the hopeless, empty cognizance of a world irrevocably soiled.  So seldom do human beings rediscover that beauty once the ugliness has been revealed.  He looks down because he has chosen to see no more.

Over dirt and rock, he walks; over broken glass, cracking under his feet, plastic bags and candy wrappers, blowing in the wind.  Over sidewalks, barren, the man walks.  There are no dandelions reaching out between the cracks.

He walks past crowds, shouting at him, cursing at him.  Even the first time, when it all seemed so strange, those curses felt familiar.  He is certain that he knows no one in the crowd, but he knows the curses.  He is close to home.  He keeps on.

He hates this part the most.  The walking.  The hoping.  Tortured with the possibility of a different outcome, he walks.  But he never truly believes it will end differently.  The man knows how it will end.

But he cannot help but hope—hope that this time he will stop, or turn around, or even join the crowd and turn those curses to praise.

Someday, perhaps, it will change, but not today.  Today he keeps on, his pace never changing, his eyes seldom lifting even to look where he is going, and then only briefly, only forward.  He does not want to see where he is going.

He does not need to see where he is going.  He already knows.

And finally, he stops to pick up the small metal instrument.  He feels his hands close around its handle.  Only then does he see before him the huge, wooden cross and the faceless figure—neither male nor female, young nor old—tied securely, legs straight down on the vertical plank, arms stretched as far as they can go on the horizontal, palms open, pleading, or maybe waiting for an embrace.  He can never tell.  Truthfully, he no longer knows the difference.  It always surprises him that his victim never struggles.  He can feel the hoping in his victim.  Give up, he wants to say.  Hope hurts too much.

Almost as much as for the dreams to stop, he wants just once to see who it is, to look into the eyes of the one he tortures, of his own torturer.  But to see those eyes is his greatest fear; and when that fear begins to enter his own consciousness he begins to smell the fear of his counterpart.

It is then, as always, that he begins to drive nails into flesh.  And it is always the screams of his victim which awake him.  Or are those his own screams?

Either way, he will sleep no more.

The crucifixion has begun.