The Uncallused Hand | Finalist for Foreword Review Book of the Year! 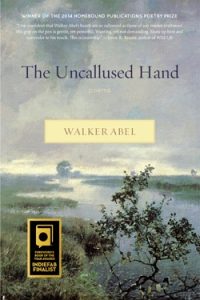 We’re proud to announce that Walker Abel’s debut collection The Uncallused Hand, has been named a finalist in the 2015 Foreword Review Book of the Year Awards! The Uncallused Hand was also named the winner of the 2014 Homebound Publications Poetry Prize!

Look for The Uncallused Hand in paperback

and ebook wherever books are sold!

“I am confident that Walker Abel’s hands are as calloused as those of any master craftsman. His grip on the pen is gentle, yet powerful. Wanting, yet not demanding.  Show up here and surrender to his touch. This is courtship.”

“Walker Abel’s finely executed poems are entirely pleasing in their music, the cadences of their consistent tones and mystery.  This is a welcoming book, a fascinating pairing of the lush and the sparse, both contemplative and provocative.  I’m drawn to the landscape created in The Uncallused Hand.  I like moving within it.  Cross through the gates that these poems offer.”

“The world behind the word, that is Walker Abel’s devotion. His sacrifice is to the visible creatrix. His benediction, and ours, is that mute gods are given voice in these generous poems.”

—Michael Hannon, author of Imaginary Burden and Who on Earth

“Walker Abel’s poems are elemental, meditative, and rich with earth’s smells and sounds. One feels weightless navigating this landscape of pine needles and sagebrush, unhinged by time or sorrow, capable of floating away on birds’ wings and moving waters. He captures the trembling silhouette of love and shows how necessary it is to pause and await nature’s music. The Uncallused Hand offers a guide through “all things both endless and terminal.”

“In a profoundly heartfelt and erotic voice, Walker Abel’s The Uncallused Hand, testifies to the compelling interconnectedness of all things. Abel takes us on a journey where the presences of tree, of leaf, river, deer, heron, taste of strawberries, touch of lover on the hand and heart are spoken in a language that rises up ‘beyond the muscles of … knowing,’  a language deeply informed by love. The longing evoked in these poems carries us so deeply into the presence of what is right here before us that it moves us toward what is also beyond, what is ‘revealing though not itself revealed.’ The author invites us to that mysterious edge where we might glimpse nature not as a collection of events happening around us, but as ‘simply the way we are.’ In the best and truest sense, these poems take us ‘Almost Home,’ as the poem by that title so poignantly invites.”

“The Uncallused Hand is full of wild things. There is both stillness and exaltation here.  Aspen and willow branches entwine around Walker Abel’s words, and granite mountains dot the landscape of his poetry: a source of both rivers and reflection. I felt myself made more earthy for having walked in the wilderness of his words.”

—Jason Kirkey, award-winning author of Estuaries and The Salmon in the Spring

About the Author: Walker Abel lives in a remote home in the Yolla Bolly Mountains of northern California. As an undergraduate at University of California, Santa Cruz, in the mid-70’s, he participated in an environmental studies field program called Sierra Institute. Twelve years later, after completing a graduate program with ecopsychology pioneer Robert Greenway, he came back to teach for Sierra Institute, which he has done now for 26 years, while also taking on the role of director since 2003. Most of his poetry has been written in field journals while out on these academic programs, which are 9 weeks long and are entirely taught during a series of backpacking trips. It has not been unusual for Walker to teach three programs a year, amounting to a total of up to 6 months in the backcountry. One of his greatest joys is watching each new group of students open over time to the transformative influence of wilderness immersion. Walker has a 33 year old son (Stuart), who is also an ecopsychologist, backpacker, and nature-connection educator.