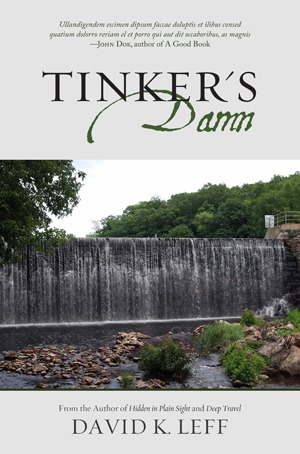 Tinker’s Damn by David K. Leff is now available worldwide. Look for it on Amazon, Barnes&Noble and wherever books are sold. The collection is also available in Kindle, Nook, and Kobo edition. Deeply rooted in place and time, the poems in Tinker’s Damn explore nature, the built environment, and human relationships with an acute sense of reverence and wonder that renews the spirit.

“The poems in David K. Leff ‘s Tinker’s Damn underscore the irony of its title beautifully. Where others might see only a sterile landscape of winter ice not worth a tinker’s damn, he sees a glory of ice sculptures glittering under a cold winter sun. Leff loves the hunks and colors of this world as few of us are able to, and he describes them—both the natural and the human— in such graphic detail that they leap to life on his pages. Here too is a deep sadness for dreams not lived, for doors not opened, for piles of shoes at a concentration camp. But the water of life flows through this book, and the poet puts us in intimate touch with it. Even a dump full of life’s discarded debris is “a stew of forgotten stories the future may discern.” In Tinker’s Damn, the very stones have stories to tell. You will be richer for hearing them.”

”The irony inherent in how David K. Leff titled his new collection of poems is that he actually does give so much more than “a tinker’s damn” about so many things. …Tinker’s Damn has deeply felt poems that stand on their own yet overall its strength is in how it’s so tuned to Nature. Thus, it’s a very welcome addition to Leff’s important previous environmental study volumes of prose and poetry. Tinker’s Damn is a satisfaction, a pleasure, a series of revealing river bends.”

“Reader stand warned and prepare yourself before you open the cover of Tinkers Damn David K. Leff. Prepare yourself for the most extraordinary journey to the deeper places of your heart. Leff walks in the world not only paying attention, but paying attention with reverence. He captures delight, despair, and the details of being human with delicacy, honesty, and craftsmanship, and his exploration of the seasons, the months of the year, the shoreline and the heart turn them into something new, which is why any sensible and sensitive human being turns to poetry in the first place. This poet takes you on a night walk that contains several lifetimes, and in a most remarkable way transforms his very personal experiences into windows to your own heart. This fine book, Tinkers Damn is both a journey and a homecoming.”

“The poems in David K. Leff’s latest poetry collection Tinker’s Damn pulse with the quiet constancy found in rivers and old clocks. Time pauses for us, fires back with fury and persistence, and drifts with the haiku-stillness of the Farmington River—all rendered in Leff’s poems with meditative specificity.  The voice is at once familiar and strikingly new. Images and the burnt shells of houses we’ve all lived in remain with us, as they should, ‘pieced / together by an archeology of recollection,’ Whether cataloging each month of the year, visiting Monticello or a run-down drive-in, transcribing the impossible (Grandma’s chicken soup recipe) or letting go of dust collecting in the closet, Leff’s kinship with the world around him is elemental and expertly rendered. The poet treats untapped moments that inhabit and haunt us with dignity and solace.  He allows us to ‘to grasp/ this whirling life, and hold onto it at last’ and teaches us finally that ‘remembrance is resurrection.’ These poems are worth far more than a tinker’s damn, and reading them is a truly valuable endeavor.”

About the Author: David K. Leff is a freelance writer from Collinsville, Connecticut. His essays, poems and fiction have appeared in newspapers and magazines. He is the author of the nonfiction works,The Last Undiscovered Place, which was a Connecticut Book Award finalist, Deep Travel and Hidden in Plain Sight. He has also penned two volumes of poetry, The Price of Water and Depth of Field, which pairs poems with his own photographs.

Leff is a member of the Hartford Courant Place Board of Contributors and has been a columnist for local weekly newspapers. He is on the board of the Riverwood Poetry Series. He has been a contest judge for the Connecticut Poetry Society and given poetry workshops for the Sunken Garden Poetry Festival and elsewhere. He has lectured about environmental and community planning topics, nature writing and other subjects on college campuses, at conferences, for annual meetings and other events throughout Connecticut and beyond.

Leff has received a number of awards. In 2012 the Connecticut Association of Conservation and Inland Wetland Commissions gave him “a special recognition award” for his environmental advocacy and writing.