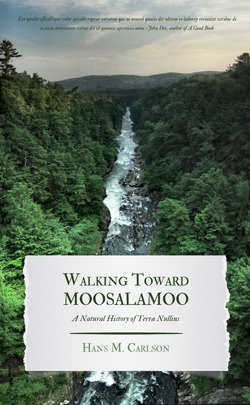 Walking Toward Moosalamoo, Hans M. Carlson’s second book, is a story of humans and the earth, as well as being a chronicle of three summers spent hiking, to a place called Mount Moosalamoo, in the Champlain Valley of Vermont. At bottom, it is an environmental inquiry into the dialog between humans and the land, one concerned with our current environmental crises, but also with the historical and cultural terrain of New England–its narrative geography. Along the way, Carlson muses on the ways we speak of the earth–how we often wound it with our words, but also how we limit our own freedom, and wound ourselves, by misrepresenting our storied relationship with the land that supports all our lives.

Within, Carlson also tries to engage the long tradition of Native American thinking on this continent–the intellectual history of North America – as an answer to the questions he raises about our troubled relationship with the earth. He is particularly concerned with Indigenous understandings of words and stories–with the idea that it may not be just humans creating the story in which we all live – and a good deal of this work is trying to think about an earth who speaks. He also looks closely at America’s dark colonial history, the acknowledgment of which he calls “the price of admission” to his dialog with Native ideas. This is an environmental and political argument for listening to the earth, but also one for listening to each other. “Moosalamoo” is more metaphor than mountain, then, and the destination is a new story, not a peak in the Green Mountains.

“Through the lens of a beguiling New England landscape Hans Carlson gives us a sensitively written and deeply personal reflection on the meaning of nature, history and culture in our current environmental predicament.”

—Sir Peter Crane, Yale School of Forestry and Environmental Studies, and author of Ginkgo: The Tree that Time Forgot

“This is a powerful account of the deep history of a remarkable corner of our remarkable planet. With its recognition that the stories we tell must reckon with the first people who inhabited our various places, it tends toward a real healing.”

“Walking Toward Moosalamoo is an insightful and inspiring journey to explore how we’ve gotten to where we are and the work in front of all of us if we are to find a more equitable and ethical way forward. Building on Thoreau, Muir, and Leopold this inventive storytelling approach weaves the reader through the past, present and future.” 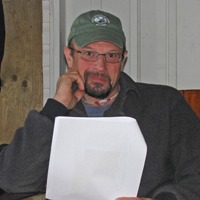 Hans Carlson is Executive Director of Blue Hill Heritage Trust, a conservation and community organization that serves the Blue Hill Peninsula, in Downeast Maine. Prior to that he was Director of Great Mountain Forest, a 6300-acre working and research forest in northwestern Connecticut, which has been under conservation for over a century. A forest and environmental historian, he holds an MA from the University of Vermont, and a PhD from the University of Maine. He has taught in the American Indian Studies Department at the University of Minnesota, and is the author of Home Is The Hunter: The James Bay Cree and Their Land. He is an avid outdoors-man, a woodworker, and boat-builder, and has traveled extensively across northeastern Canada and the United States, by canoe, truck and on foot. He was also a contributor to the Historical Atlas of Maine.

“I have lived all but a few years of my life in rural New England, where I have engaged with issues of land use and the environment. These have been lifelong concerns, brought into sharp focus by my research and my work in conservation. My work in the north, and with Native peoples, has also given me a perspective on this landscape. People have been working this land, with their hands and their ideas, for thousands of years, and we will continue to do that into the future. In doing that, I believe that we have a responsibility to pass the land on to future generations in as good as or better shape than we took it over. I believe too that we have a responsibility to pass along an appreciation for the land, and the lessons we have learned, and both these responsibilities define the stewardship necessary for all our futures ”