Wasteland or Wilderness | An Except from Chewing Sand

A selection from Chewing Sand: An Eco-Spiritual Taste of the Mojave Desert by Gail Collins-Ranadive

Perhaps it’s a tribute to human ingenuity that early Euro-Americans could look at Nevada’s arid vastness and see hidden treasures of silver and gold, gypsum and oil. However, there is one little glitch in our greed: once these resources run out, what’s left in their place are ghost towns and waste tailings.

So it’s no wonder that the next wave of attention paid to Nevada turned towards making the best use of its wasteland: our military relished the open empty space as a place for the testing out of its hardware, including the atomic bomb.

There’s a pull out on the side of Mount Charleston a mere thirty miles north of Las Vegas where today you too can stand where tourists once watched atomic blasts for entertainment, some while sporting a special mushroom cloud hairdo. And now, not far beyond the shimmering mirage of water held in the brown bowl of the desolate desert, a repository is up and running, ready to receive the Nation’s nuclear waste.

Perhaps it’s a tribute to the change in human awareness that brings many Nevadans out in protest of that project, and compels others to become advocates of this place by striving to protect it, and by legally preserving it as wilderness.

“In wilderness is the preservation of the world,” wrote Thoreau in the era that launched our sense of Manifest Destiny. The war he refused to support with his taxes, that act that landed him jail, was the one during which we wrangled the whole of the Southwest away from Mexico. We really only wanted more direct access to the riches of California, and had no idea what to do with the wilderness that lay in between.

The whole notion of letting it be for its own sake rather than for ours is a new one, born from the souls of first peoples, poets, hikers, spiritual hermits, and the like. To count yourself among them would mean becoming an active and activated part of the earth’s immune system. It would mean aligning yourself with efforts to protect threatened species like the desert tortoise, the Mt. Charleston blue butterfly, and the Moapa dace. It would mean agonizing over the irreparable damage done by off roaders and target shooters. And it could mean wondering about the place of your own species within the bigger picture of things.

Wasteland or wilderness; exploit or experience; abuse or appreciate; useless or use less; the choice that is facing us plays out in the vast sea of sagebrush and sand that spreads between ranges of mountains that make up the land of Nevada. 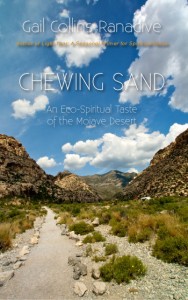 An Eco-Spiritual Taste of the Mojave Desert

About the Book: What happens when an Easterner who needs trees, hates heat, and doesn’t gamble spends a year living in Las Vegas? Follow the author’s reflections as she comes to appreciate the surrounding desert so deeply that she returns seven years later to hear more of the Mojave’s message. Share in the process as this desert reveals itself as both a macrocosm and a microcosm of the major issues facing us today. For as a sacred text set in the perspective of deep time and clarified by silence, the Mojave landscape has the power to move us humans from an ego-self to an eco-Self awareness.