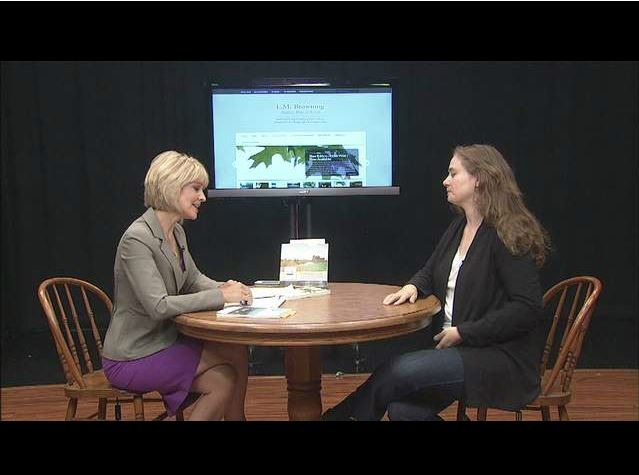 Author and Homebound Publications’ Founder L.M. Browning is on the latest episode of NYBERG. (Watch Below)

Ann Nyberg is WTNH New Haven’s longest serving Anchor/Reporter in station history. Ann anchors the 6 and 10 o’clock nightly newscasts. What really gets her going is breaking news, unscripted, rock-and-rolling, by the the seat of your pants reporting.

Nyberg, nominated for multiple Emmys, has interviewed some of the country’s greatest broadcasters, including the late Walter Cronkite and Peter Jennings. Other highlights include assignments to the communist country of Cuba and to the Vatican to cover Pope John Paul II. She’s also moderated senatorial and gubernatoral live televised debates.

Ann has been voted “Best News Anchor” for a decade in “Connecticut Magazine’s reader’s poll. Nyberg’s website Network Connecticut.com, spotlights people and places all over the state. Nyberg believes in connecting to her community and does that off the desk through Facebook and Twitter. You can find her at Ann Nyberg on Facebook and@AnnNyberg on Twitter.  More info»

L.M. Browning grew up in a small fishing village in Connecticut. A longtime student of religion, nature and philosophy these themes permeate her work. In 2010 she wrote a three-title contemplative poetry series that garnered several accolades including 2 pushcart-prize nominations and the Nautilus Gold Medal for Poetry in 2013. In late 2011 she followed up this success with her first full-length novel, The Nameless Man.

Browning is a graduate of the University of London and a Fellow with the League of Conservationist Writers. She is partner at Hiraeth Press, Co-Founder of Written River: A Journal of Eco-Poetics as well as Founder and Executive Editor of The Wayfarer: A Journal of Contemplative Literature. In 2011, Browning opened Homebound Publications—a rising independent publishing house based in New England.

Her latest title, Fleeting Moments of Fierce Clarity: Journal of a New England Poet, is a journal of her daily contemplative life along the shores of Connecticut and her travels throughout the Northeast. She currently divides her time between her home in Connecticut and her work in Boston. She anticipates the release of a collection of daily meditations in November 2013 entitled, Seasons of Contemplation. Her next novel due out in late 2014. Follow L.M. on Facebook or at twitter @LMBrowningpoet or follow Homebound Publications on Facebook and Twitter at @homeboundpub. More Info»