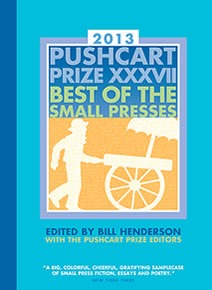 Homebound Publications is pleased to announce our nominations for the 2013 Pushcart Prize!

•   Chapter III: “In the Land of the Pharaohs” by Theodore Richards, featured in the novel The Crucifixion  [April 2012].
•   “The Boat-Rocker” by L.M. Browning, featured in Fleeting Moments of Fierce Clarity: Journal of a New England Poet  [October 2012].
•   “Chapter 37” {The Final Chapter} by Jordan Arey, featured in the forthcoming novel, Powers of Influence  [November 25, 2012].
•   “Anam Cara” also by L.M. Browning, feature in Oak Wise: Poetry Exploring an Ecological Faith recently published in an expanded edition [October 2012].

About the Pushcart Prize: The Pushcart Prize – Best of the Small Presses series, published every year since 1976, is the most honored literary project in America. Hundreds of presses and thousands of writers of short stories, poetry and essays have been represented in the pages of our annual collections.

Writers who were first noticed here include: Raymond Carver, Tim O’Brien, Jayne Anne Phillips, Charles Baxter, Andre Dubus, Susan Minot, Mona Simpson, John Irving, Rick Moody, and many more. Each year most of the writers and many of the presses are new to the series.

Our Pushcart Prize editions are found in most libraries and bookstores.

Good luck to all our authors!