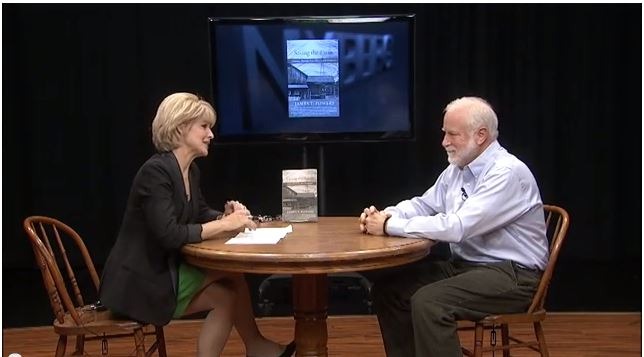 James T. Powers, author of Saving the Farm is on the latest episode of NYBERG. (Watch Below)

Ann Nyberg is WTNH New Haven’s longest serving Anchor/Reporter in station history. Ann anchors the 6 and 10 o’clock nightly newscasts. What really gets her going is breaking news, unscripted, rock-and-rolling, by the the seat of your pants reporting.

Nyberg, nominated for multiple Emmys, has interviewed some of the country’s greatest broadcasters, including the late Walter Cronkite and Peter Jennings. Other highlights include assignments to the communist country of Cuba and to the Vatican to cover Pope John Paul II. She’s also moderated senatorial and gubernatoral live televised debates.

Ann has been voted “Best News Anchor” for a decade in “Connecticut Magazine’s reader’s poll. Nyberg’s website Network Connecticut.com, spotlights people and places all over the state. Nyberg believes in connecting to her community and does that off the desk through Facebook and Twitter. You can find her at Ann Nyberg on Facebook and@AnnNyberg on Twitter.  More info»

Over the years, his interests and expertise have expanded to include local archeology and the study of New England Colonial architecture both which he teaches at Guilford High School in Guilford, Connecticut.  Besides a BA, James has also received two Masters Degrees from Wesleyan University. His first book,  Saving the Farm; A Journey through Time, Place, and Redemption is a product of his passion for the past. James and his wife Rita live in an 18th Century home in Durham, Connecticut that they are currently restoring and on Prince Edward Island, Canada.