Seeing the Past by James T. Powers

We’re celebrating the release of Seeing the Past: Stories on the Trail of a Yankee Millwright by James T. Powers.

Look for the book on Amazon, B&N and Indiebound.org or order from the Homebound Publications Store.

Milo Todd was not content with his future lot in life.  Having inherited his family gristmill in the tiny village of Northford, he lived at a time of dynamic economic change during the latter half of the 19th Century and spent his life determined to be part of it.  The quest to do so would bring Todd on a journey across Connecticut as he sought his place in that rapidly transforming world.

The historical landscape created in following Milo’s journey takes us from a forgotten Native village on the shore of Long Island Sound at the dawn of the 17th Century to Hartford, a frenetic and bustling hub of 19th Century New England capitalism.  In the process, that landscape presents a panoramic look at our collective past that illustrates who we were as a people and thus who we are today.  By exploring Todd’s odyssey as well as stories and episodes from the times and places in which he and his family lived, Seeing the Past; Stories on the Trail of a Yankee Millwright vividly brings the past to life and connects us with  the often forgotten shadows of our shared history.  In doing so, we gain a better understanding of how, through time and place, in seeing the past, we see ourselves.

James T. Powers digs deeply into a small patch of nineteenth century New England in a way that illuminates the present and expresses the universal challenges we all face in a rapidly changing and accelerating world. It is a story of resilience, adaptability, and persistence necessary to meet life’s uncertainties and opportunities. By interspersing novelistic first person narratives from a bygone era, Powers enlivens the past as he leads us on a fascinating adventure of contemporary archaeological and historical discovery. 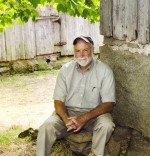 Over the years, his interests and expertise have expanded to include local archaeology and the study of New England Colonial architecture both which he teaches at Guilford High School in Guilford, Connecticut.  Besides a BA, James has also received two Masters Degrees from Wesleyan University. His first book,  Saving the Farm; A Journey through Time, Place, and Redemption is a product of his passion for the past.