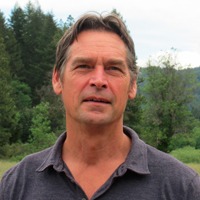 Walker Abel, along with his partner Willow, lives at a remote off-grid home in northern California. As an undergraduate at University of California, Santa Cruz, Walker participated in an environmental studies field program called Sierra Institute. Twelve years later (1988), after completing a graduate degree with ecopsychology pioneer Robert Greenway, Walker came back to UCSC to teach for Sierra Institute, which he did for 28 years, while also taking on the role of director in 2003. Most of his poetry has been written in field journals while out on these 9-week academic programs, which were taught entirely off-campus during a series of backpacking trips in wild areas of California. One of his greatest joys was watching each new group of students open over time to the transformative influence of wilderness immersion.

Walker’s first book, The Uncallused Hand,  won the 2014 Poetry Prize from Homebound Publications. That book also went on to be a Finalist in Foreword Reviews 2014 Book of the Year and to win Gold in the 2015 Nautilus Awards.

Walker has practiced Zen with Roshis John Tarrant and David Weinstein of Pacific Zen Institute and is currently a student of Roshi Teja Bell of Qigong Dharma.